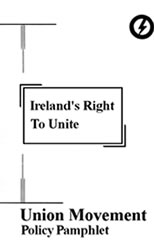 The division of Ireland is wrong. It should end as soon as possible. It causes hardship to the South because the Six Counties contain industries which are a natural complement to the agriculture of the South. It is bad for Catholics in the North as they are denied full civil rights and social justice by the controlling Protestants. All southern patriots desire the union of Ireland. The Protestants of the north do not. They are frightened by the prospect of a united Ireland because they fear that the resulting predominantly Catholic government would discriminate unfavorably against them. How then can the rights of the Protestant minority be guaranteed? Oswald Mosley offers a suggestion through Union Movement whose policy advocates the union of Europe - "Europe a Nation". This does not mean a great mix-up of the people of Europe; on the contrary it would be wished to preserve the roots and culture of all Europeans. A European government would guarantee the rights of all minorities in Europe, for even large nations would be minorities of the whole. The union of Europe will solve the problems of the Tyrol and of Gibraltar, of the Flemish in Belgium and of Protestant and Catholic in Ireland. ...