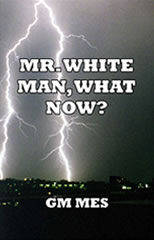 Foreword. In his recent book "Now Men and To-morrow Men", Mr. Mes expounded a new theory, supported by arguments which would require strong counter arguments indeed, to cast doubt upon the correctness of the theory. He concluded that in the scale of evolution the transition from the ape-man to man occurred not when his skull took on a different shape but when his mind became conscious of the future and lifted him out of the paradise of the present, which is that of the animal world. This occurred not on the day that our ancestor made his first tool or weapon but on the day that he remembered to keep the stick or stone which had come fortuitously in his hands because of the nature of the terrain where he had just used it, in a contest. He henceforth would have a weapon at hand whatever the nature of the terrain and could of course gain a great advantage over his enemies by choosing the battleground. From then on the choosing, shaping and making of weapons and tools followed automatically together with all the advantages to be thus gained over an adversary who did not know of his future existence. This faculty of a future-sense developed sporadically and at a different pace in different parts of the world until man of today could be broadly classed into three categories, without clear boundaries but broadly typical of the extent of such development: The man of the east whose future-sense had reached eternity, making him in his thinking a fatalist - merely a link in the chain of eternity. The Bantu of Africa with a very short future-sense and the happier for it because of his ability to enjoy the present without much concern for the future, and the White man of Western Europe with a short to medium future-sense, the restless go-getter to whom is denied the restful resignation of his fatalistic long-futured or happy short-futured fellow man. The present work is an endeavour by the author to apply his theory to the rise and fall of past civilisations and to seek an explanation for this manifestation, naturally with an eye on all manner of other factors to avoid over-simplification. Step by step and with logical sequence he brings us to the rise of our present "Western Civilisation.” He pinpoints its advent with the development of the fire-arm and the ability of the medium-futured to use it because of his approach to life, based on the “survival of the fittest" in a world which to him had a sufficient future to justify such use. The short-futured have a "tempo-cognition" which may extend quite far into the future but it is not real to him - his "tempo realisation". He is satisfied to fight today without much thought of tomorrow. The very long-futured regard fighting as pointless in the scheme of things. The white man with his gun saw the advantages. He could shoot the taboos out of the Gods of the short-futured and subdue the long-futured ones who were not much interested in who governed, as such, because all they wanted was to be left alone, provided life was not made too unendurable while it lasted. The white man, with a "tempo-realisation" of say four years and a "tempo-cognition" of about 30 years, with his gun in his hand saw the advantages of being the "master" and of course, taking the bounty. He put his gun to use, thus becoming the ruler of the world and wealth with ease and luxury in sight. Two devastating world wars, however, have made him tired of carrying the burdens of overlordship, which is a much more difficult self-taxing position than that of the slave, who must do his work, but may look to the master to house, feed and protect him and, most important, make all the decisions for him, involving all the future implications of such decisions. In his flight from the responsibilities created by his past conduct the white man is withdrawing his white policemen all over the world, leaving his wards without the machinery by which they governed themselves before his advent, but in its stead a "Whitehall constitution" which is workable only where the population is medium-futured. ...