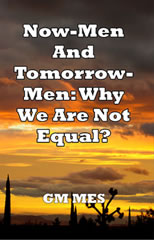 Author : Mes Gerritt Marie
Title : Now men and tomorrow men Why we are not equal ?
Year : 1964

Foreword. People vary greatly both as individuals and communities in the extent of the provision they make for their futures. Hunters, like the Bushmen, keep weapons and tools with which they can hunt, dig, collect and carry their food, but they live from day to day, on what they find or encounter, almost like lower animals. Those who dry and smoke, or salt their fleshy food like the Eskimos and other fishermen, have learnt food storage. Nomads, that take their herds on trek, and agriculturists who harvested crops learned to look still further into the future. Out of this there developed that sense of time which governs everything city dwellers do. Invisible time dominates the lives of every civilised person and industrial community. The schoolbell punctuated each work day of our youth until holidays came. As adults our daily lives on land, at sea or in the air depend upon accuracy of timing. Nobody escapes. In the country and city alike our lives are based on its ruthless passing. Times of sleeping and waking, of learning and labour, of eating and recreation: they all go by the clock. So time, though intangible, is something that all of us naturally take, and are forced by circumstances long since outside the control of any individual human being, to take extremely seriously. Alarm clocks awaken the sleepy heads. Watches are on our wrists, diaries in our pockets or handbags, and calendars placed on our desks or suspended in our workshops. Our wages come each week or each month along with our bills We celebrate a regular series of birthdays and holidays each year. We serve apprenticeships over a stated number of years and gain diplomas or degrees. Hence time is also something that every human being rightly thinks he or she knows a great deal about. Its importance has been drilled into us by proverbs from infancy. Take time by the forelock! Time and tide wait for no man! Over two thousand years ago the great Greek tragic poet Aeschylus was telling his audience "time is the great teacher." Those words 'time' and 'tide' both have their source in the simple Aryan root TI 'cut or divide'. Invisible and intangible as time is, man gradually mastered the art of dividing it. Those words may help us to see when that dividing process started. Our words for that major time division a 'month' is inseparable from the word 'moon'. So it is likely that the root MAN (MEN) which gave us words such as 'man, woman, memory, menstruation' and the like is merely an expansion of the primary root MA (ME) which earlier still had given us words like 'mamma' to English, mamma 'breast' to Latin and meter 'mother' to Greek The same root gave Aryans their words for 'making and measuring or creating’. The fact that another closely related Aryan root MER (MAR, MOR) gave us words ‘such as marsh, mere, morass mortal’ may indicate that when our ancestors were becoming articulate about time and dividing it by the aid of measuring the moon’s phases they were also fishermen deeply concerned with the tides and the sea, that brought them food in plenty besides the possibility of sudden death, twice daily. Remembering those things were matters of urgency. Despite the length of early civilising man’s thinking about time and his observations of heavenly bodies and his recordings down the ages of their comings and goings, their movements and eclipses, and despite his naming them and worshipping them, what we do with our understanding of time is still rudimentary. ...