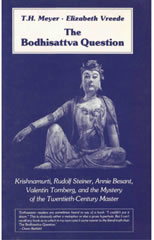 Introduction. Many confusing legends have grown up around the individuality of Rudolf Steiner during the course of this century. One such legend, which is still extant today, says that he is identical with one of those exalted beings known to oriental tradition as 'Bodhisattvas'. Especially since the early Thirties of this century the question has been mooted again and again in anthroposophical circles as to whether Rudolf Steiner himself is to be regarded as the Bodhisattva of the twentieth century, one of whose missions, according to the inaugurator of spiritual science, is to proclaim the 'reappearance of Christ in the etheric spiritual realm'. Who, apart from Rudolf Steiner, has attempted to do that? This controversy over the Bodhisattva question was preceded by a long drawn out dispute which had taken place within the Theosophical Society. The expulsion of the German Section of the Theosophical Society in 1913 (Rudolf Steiner had been its General Secretary since 1902) stands in direct relationship to this question. We must remind ourselves of the young Krishnamurti who had been presented to the world in a rather indiscriminate way as both the supposed Christ and also as the Bodhisattva of the twentieth century by C.W. Leadbeater and Annie Besant. A special Order was created with the task of preparing the way for the coming 'World Teacher'. But the Order was suddenly and unexpectedly dissolved by Krishnamurti, its Head, in the summer of 1929. No sooner had the young World Teacher disclaimed all connection with the throne which had been assigned to him than other claimants began to appear to fill the vacant seat. And this was a phenomenon that occurred increasingly in anthroposophical circles. In order to spare the anthroposophical movement the travails of the false idolization into which the theosophists had largely fallen, Adolf Arenson, one of Rudolf Steiner's most long-standing pupils, decided in 1930 to bring the important matter before the members of the Anthroposophical Society. In treating the delicate subject, which required careful discrimination, he related it to Steiner himself. Arenson's lecture was immediately copied and was quickly and widely disseminated among the anthroposophists of that time. ...