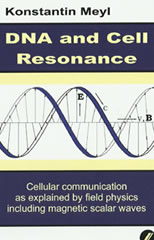 In the water resonance DNA sends a longitudinal wave which propagates within the magnetic field vector. Computed frequencies from DNA structure agree with bio photon radiation frequencies as predicted. Optimization of efficiency is done by minimizing the conduction losses which leads to the double helix structure of DNA. The Meyl vortex model of the magnetic scalar waves not only covers the many observed structures within the nucleus but also introduces the reader to the hyperboloid channels in the matrix as two cells are then found to communicate with each other. Physical results were revealed in1990 which form the theoretical basis of the essential component of a potential vortex scalar wave. An extended field theory approach has been known since 2009 following the discovery of magnetic monopoles. For the first time magnetic scalar wave theory best explains the physical basis of life not only from the biological discipline of science understanding only. And for the first time this interdisciplinary theory and provides a new understanding of cellular functions that are explained such theory depicting the complex relationships of nature. ...