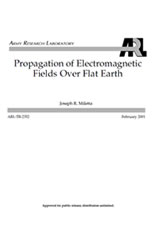 Abstract. This report looks at the interaction of radiated electromagnetic fields with earth ground in military or law-enforcement applications of high-power microwave (HPM) systems. For such systems to be effective, themicrowave power density on target must be maximized. The destructive and constructive scattering of the fields as they propagate to the target will determine the power density at the target for a given source. The question of field polarization arises in designing an antenna for an HPM system. Should the transmitting antenna produce vertically, horizontally, or circularly polarized fields? Which polarization maximizes the power density on target? This report provides a partial answer to these questions. The problems of calculating the reflection of uniform plane wave fields from a homogeneous boundary and calculating the fields from a finite source local to a perfectly conducting boundary are relatively straightforward. However, when the source is local to a general homogeneous plane boundary, the solution cannot be expressed in closed form. An approximation usually of the form of an asymptotic expansion results. Calculations of the fields are provided for various source and target locations for the frequencies of interest. The conclusion is drawn that the resultant vertical field from an appropriately oriented source antenna located near and above the ground can be significantly larger than a horizontally polarized field radiated from the same location at a 1.3 GHz frequency at observer locations near and above the ground. ...