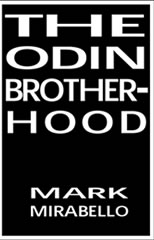 When the world is pregnant with lies, a secret long hidden will be revealed. AN ODINIST PROPHECY. INTRODUCTION. This work - written during what Hermann Hesse has called the end of modern times, shortly before the return of the Middle Ages - is designed for the student of occult religions. Paganism is a growing force, and I believe a disinterested observer should record and publish some of the material available on the Odin Brotherhood, a mysterious fraternity that is one of the most interesting manifestations of Odinist polytheism. Because my aim is preservation rather than criticism, I have simply detailed the Brotherhood’s beliefs and have made no attempt to scrutinize their "mysteries." At times the ideas relayed to me were unusual in the extreme - doctrines that deify men and humanize gods, legends of magic gates that lead to divine enclaves, prophecies of wars with apocalyptic monsters, clues concerning a treasure trove of golden monoliths, and much more - but I have decided to record these ideas without comment. It is my hope, however, that others will some day evaluate the interesting and perplexing phenomenon that is called Odinism. Since the Odin Brotherhood is a "secret society," my sources (encountered while I was conducting doctoral research in history at Scotland’s University of Glasgow) must remain anonymous, and I therefore cannot document my materials with the proper references. This omission, I regret to note, is especially lamentable because I cannot guarantee the credibility of the individuals who communicated with me. My sources seemed respectable enough - they were not "trafficking with dark forces" - but I urge my readers to approach all the material in this work with the proper skepticism. For readers who may wish to establish personal contact with the Odin Brotherhood, I can provide no certain mechanism. I can affirm, however, that a few members of the Brotherhood are also members of certain Odinist groups that do not shun publicity, so association with "public" Odinist organizations may lead to an encounter with the Brotherhood. Regarding the format of this work, I have used the dialogue form because the poems sacred to all Odinists (the legendary Eddaic Verses) used conversational exchange to convey important religious information. There was a negative factor - the Eddaic dialogues always end with the death of one of the interlocutors - but I decided to ignore the risk! The dialogue that resulted is a mosaic made from the fragments of numerous discussions that occurred over several years, and it is not the actual record of one conversation with one individual. Moreover, since most of my sources did not speak English as a first language, the quest for clarity has forced me to use my own words to express their ideas. In all instances, however, I was careful to preserve the fundamental integrity of the message. ...