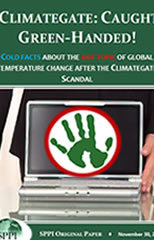 The whistle blows for truth. The whistleblower deep in the basement of one of the ugly, modern tower-blocks of the dismal, windswept University of East Anglia could scarcely have timed it better. In less than three weeks, the world’s governing class – its classe politique – would meet in Copenhagen, Denmark, to discuss a treaty to inflict an unelected and tyrannical global government on us, with vast and unprecedented powers to control all once-free world markets and to tax and regulate the world’s wealthier nations for its own enrichment: in short, to bring freedom, democracy, and prosperity to an instant end worldwide, at the stroke of a pen, on the pretext of addressing what is now known to be the non-problem of manmade “global warming”. The unnamed hero of ‘Climategate’, after months of work gathering emails, computer code, and data, quietly sent a 61-megabyte compressed file from one of the university’s servers to an obscure public message-board on the internet, with a short covering note to the effect that the climate was too important to keep the material secret, and that the data from the University would be available for a short time only. He had caught the world’s politico-scientific establishment green-handed. Yet his first attempts to reveal the highly-profitable fraud and systematic corruption at the very heart of the UN’s climate panel and among the scientists most prominent in influencing it’s prejudiced and absurdly doom-laden reports had failed. He had made the mistake of sending the data-file to the mainstream news media, which had also profited for decades by fostering the “global warming” scare, and by generally denying anyone who disagreed with the official viewpoint any platform. The whistleblower’s data file revealed, for the first time, the innermost workings of the tiny international clique of climate scientists, centered on the Climate Research Unit at East Anglia, that has been the prime mover in telling the world that it is warming at an unprecedented rate, and that humankind is responsible. ...