« Hunt Walter - Are we a Declining Race ? - Munday Billy - The Black Shadow and the Red Death »

Money Leo George Chiozza - The Peril of the White 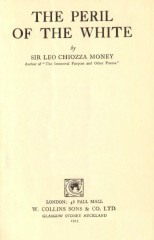 The title-page of this book bears my name, and indeed I am glad to have undertaken the great labour of its preparation, for I have found it the most deeply interesting investigation I have ever made apart from some fearful war matters, but in very truth it is the book of an army of workers, living and dead. In some part that is true of all modern essays of whatever kind, for he who works now builds with materials supplied by all the races of men through ages of endeavour, a fact very relevant to the philosophy that informs these pages. This account of the world's peoples is derived from many sources, and could not have been written by any man save for the untiring investigations and illuminating reports of census officials and other inquirers and discoverers throughout the world. Thousands of men have lived laborious days to furnish the facts and estimates here presented, and I shall be glad if I have succeeded in making their work more fruitful by gathering together and comparing so many details. We may exercise our imaginations upon the distribution, the filling-in, the collection, of millions of inquiry forms in lands near and far. What strange and eventful histories must be concentrated in the deceptively austere census papers of a London boarding-house or of a towering New York tenement building! What adventures must attend the enumeration of tribes in British West Africa, or the attempts to count heads in New Guinea. where still in some places the savage makes for the bush at the mere sight of the White Man ! In writing this book I have been assailed with a thousand temptations, to some of which I fear I have succumbed, to enlarge upon issues which are indirectly connected with its main purpose. Here, indeed, is matter to which every human issue is in some respect relevant. All the people of all the world! It is a theme which excites the imagination as one reviews in turn each section of the human race, and reflects upon and passes from nations with long recorded histories to tribes of men who to-day, as in North Buxma or in the Malay Archipelago or in the interior of Brazil, are living their lives very much as they lived them when Cresar embraced the British shore, or when Columbus discovered America. On the whole, however, I hope I have been successful in an endeavour to keep the broad outlines clear of unnecessary detail, so that my book may fulfil its purpose of presenting the world's population in perspective. In addition to using freely the official census records, I have made many calls for help upon the officials of foreign governments, embassies and consulates, and of the British Dominions and Possessions. In nearly every case I have been given valuable assistance, which I gratefully acknowledge. The concluding sonnet has been before published in the columns of The Observer, and I thank the editor for permission to reprint it here. Last, but not least, I am indebted to my daughter Doris for devoted help in the investigation of fact, and in transcribing and correcting pages which for the most part had to be dictated. There are so many statements of fact in this book that it is impossible to hope that accuracy has been attained at every point. Indeed, a good deal of estimation had necessarily to be made. I should be grateful to receive notification of any mistakes that may be detected. L. C. M. April, 1925. ...

« Hunt Walter - Are we a Declining Race ? - Munday Billy - The Black Shadow and the Red Death »