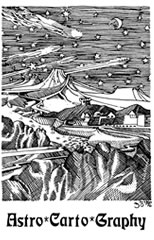 Introduction. What is a horoscope ? In order to understand what your Astro*Carto*Graphy map means it's best to understand what a horoscope is. The planets, which seem to move constantly in the sky, :lo so because of two factors: their own orbits around the Sun, and the motion of the Earth in its daily rotation. A horoscope is just a map of the sky at the moment and place of birth, and no two are ever alike unless the individuals were born at the same time and place. If you have a conventional horoscope for yourself, you can see how it is just a map of the sky- if you were born at around Noon, for example, the Sun symbol in your chart appears near the top, just as the Sun did in the sky at that moment of time, and the other planets are also as they appeared then. However if you had been born at the same time, but in a different place, the chart would change, since when it is Noon in Chicago, it is late afternoon in London, so the Sun in that theoretical chart would be in a different part of the horoscope altogether, and would symbolically have a different meaning. The planets move fairly slowly, staying in the same part of the zodiac for months or even years, but the Earth rotates at a fairly rapid rate, so even a few minutes of time difference in births put different planets in different positions relative to the local horizon of the location, and this is the reason that even twins will have different horoscopes, and thus, different destinies. But, we have just seen that motion on the Earth's surface has the same effect as changing the time, so that, within certain limits, you can change your chart by travel away from your place of birth. ...