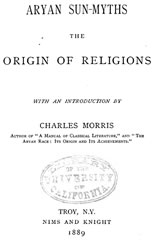 The attention of the writer having been called to the fact that all Indo-Germanic nations have worshipped crucified Saviours, an investigation of the subject was made. Overwhelming proof was obtained that the sun-myths of the ancient Aryans were the origin of the religions in all of the countries which were peopled by the Aryans. The Saviours worshipped in these lands are personifications of the Sun, the chief god of the Aryans. That Pagan nations worshipped a crucified man, was admitted by the Fathers of the early Christian Church. The holy Father Minucius Felix, in his Octavius, written as late as A. D. 211, indignantly resents the supposition that the sign of the cross should be considered as exclusively a Christian symbol ; and represents his advocate of the Christian argument as retorting on an infidel opponent thus : "As for the adoration of crosses, which you object to against us, I must tell you that we neither adore crosses nor desire them. ...