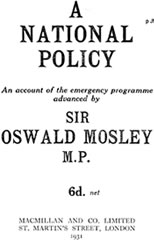 The crisis. We are confronted by a national crisis. The unemployment figures have risen to the terrible total of two and a half millions. The position of the industrialist becomes daily more impossible, and that of the worker daily more precarious. The Unemployment Insurance Fund is bankrupt. Heavy attacks on the standard of life of the masses miners, railwaymen, public servants, etc., are upon us, and Parliament seems powerless to avert them. Not only are the wages of the workers in danger : our whole system of insurances against sickness and unemployment, old age pensions and educational advantages, which is without rival in the world to-day, is threatened by the economic crisis, since the money to pay for it is being found with ever increasing difficulty. Day by day the attacks on these "Social Services " grow stronger. Unless something is done and done at oncethe standard of life built up by generations of Trade Union Effort, the Social Services established by decades of political work, will be broken down. The situation demands action, if disaster to employers and workmen alike is to be avoided. ...