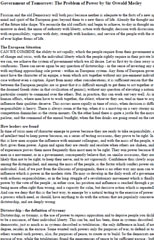 Fascism and the old Democracy will both pass because neither is adequate to the facts of a new age. The mind and spirit of the European goes beyond them to a new thesis of life. Already the thought and the act of the future take shape. We reconcile the old conflicts and begin to achieve, to-day in thought and tomorrow in deed, the union of authority with liberty, action with thought, decision with discussion, power with responsibility, vigour with duty, strength with kindness, and service of the people with the attainment of ever higher forms of life. The European Situation CAN WE COMBINE the ability to act rapidly, which the people require from their government in a period of change and crisis, with the individual liberty which the people rightly require in their private lives ? If we can, we achieve the system of government which we all desire. Let us first try to clear away some confusions. There can never again be any question of dictatorship - in the sense of investing any individual with anything approaching sole power - within an European system. Any form of European government must have the character of an equipe, a team which acts together without any pre-eminent individual, in this case without even a captain. Apart from many other considerations, it is sufficient reason that the jealousies between the European peoples are so great that it is difficult enough to get them to act together at all (like the doomed Greek states in that civilisation of genius), without any question of elevating a national of some particular country to command over the others. But, in practice, this can work out very well. As in all other human affairs, where men have to work together, the ablest, whoever they are, tend in time to acquire the influence their qualities deserve. This occurs more rapidly in time of crisis, when decision is difficult and responsibility is heavy. There is always room at the top, when it is a mast-top on a very stormy night ; the competition diminishes as the storm mounts. On the other hand there is quite a jostle for the mayor's parlour, and the command of the annual bunfight, when the free drinks are going round on the ratepayer. How leaders are found In time of crisis men of character emerge to power because they are ready to take responsibility, and men of intellect tend to keep power because, on a series of testing occasions, they prove to be right. In practice this is how men acquire the influence with eminent colleagues, and with the mass of the people, which, in fact, gives them power. Again and again they are steady and resolute when others are shaken, and the probe of experience proves them more frequently than most men to be right. They win power because the chief men in a movement, or in a government, consequently believe that, on similar occasions, they are more likely than not to be right, to keep their nerve, and to act vigorously. Confidence thus slowly acquired among the distinguished, and among the mass of the people, is the factor which confers power on an individual. And, if we part from the illusions of propaganda, there is no other way any man can win the influence which is power in the modern state. He may so develop in the daily work of a government faced with arduous responsibilities, or in the long struggle of a revolutionary movement which is finally accorded power by the vote of the people ; in either case, his position and influence is reached through a practice of being more often right than wrong, and a capacity for calm, but decisive action which is repeatedly proven. And can we deny that this is the best way, to emerge by a natural testing to the exercise of power ? It is not a process which need, or should, have anything to do with the actions that are popularly conceived as dictatorship, and are deeply wrong. ...