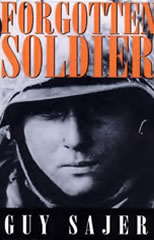 Author’s Preface. Guy Sajer ... who are you? My parents were country people, born some hundreds of miles apart - a distance filled with difficulties, strange complexities, jumbled frontiers, and sentiments which were equivalent but untranslatable. I was produced by this alliance, straddling this delicate combination, with only one life to deal with its manifold problems. I was a child, but that is without significance. The problems I had existed before I did, and I discovered them. Then there was the war, and I married it because there was nothing else when I reached the age of falling in love. I had to shoulder a brutally heavy burden. Suddenly there were two flags for me to honor, and two lines of defense - the Siegfried and the Maginot - and powerful external enemies. I entered the service, dreamed, and hoped. I also knew cold and fear in places never seen by Lilli Marlene. A day came when I should have died, and after that nothing seemed very important. So I have stayed as I am, without regret, separated from the normal human condition. ...