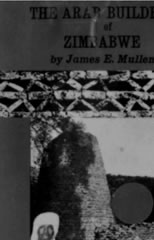 Introduction. This book represents an attempt by one who might be described as "the man in the street", to co-relate the findings and opinions of the experts in order to obtain a solution of the Zimbabwe mystery. In doing so, as is only too evident, the writer can lay no claim to having produced something of literary merit—with the possible exception of a few quotations from the various authors, whose works have been consulted, and to whom, because of their contributions towards the solving of this intriguing mystery, we are all greatly indebted. This work was not undertaken because of being prompted by some particular political bias, but is the outcome of an interest in the Ba Lemba. which was awakened in the author many years ago. when serving as a missionary in the Northern Transvaal, but which only now, after so long a time, has resulted, through opportunity for further study of the subject, in the production of this book. The question may well be asked: But why another book on this subject, especially in view of the fact, that many, considered to be experts, have written and expressed their conclusions ? ...