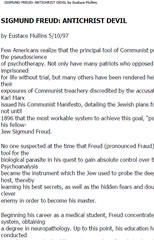 Few Americans realize that the principal tool of Communist penetration in the United States is the pseudoscience of psychotherapy. Not only have many patriots who opposed Communist subversion been imprisoned for life without trial, but many others have been rendered helpless, their fortunes seized, and their exposures of Communist treachery discredited by the accusation of “mental illness”. In 1848, Karl Marx issued his Communist Manifesto, detailing the Jewish plans for subduing the gentile, but it was not until 1896 that the most workable system to achieve this goal, “psychoanalysis”, was unveiled by his fellow- Jew Sigmund Freud. ...