Naayem Joseph - Shall this nation die 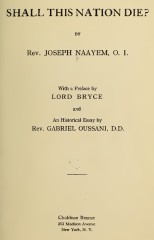 The bloodstained annals of the East contain no record of massacres more unprovoked, more widespread or more terrible than those perpetrated by the Turkish Government upon the Christians of Anatolia and Armenia in 1915. It was the sufferings of the Armenians that chiefly drew the attention of Britain and America because they were the most numerous among the ecclesiastical bodies, and the slaughter was, therefore, on a larger scale. But the minor communities, such as the Nestorian and Assyro-Chaldean churches, were equally the victims of the plan for exterminating Christianity, root and branch, although the Turks had never ventured to allege that these communities had given any ground of offense. An account of these massacres, organized and carried out with every circumstance of cruelty by Enver and Talaat, chiefs of the ruffianly gang who were then in power in Constantinople, has been given in the Blue Book, published by the British Foreign Office in 1916, and entitled " Treatment of the Armenians in the Ottoman Empire." In the present volume there is presented a graphic and moving narrative of similar cruelties perpetrated upon members of the Assyro-Chaldean Church in which about half of them, men, women and children, perished at the hands of Turkish murderers and robbers. The narrative is written by the Rev. Father Naayem, who saw these horrors with his own eyes and narrowly escaped with his life. He has recounted to me and to other friends of his people in England the terrible story, and we have encouraged him to believe that his English translation of his book will be read with sympathy and pity both here and in the United States. I venture to recommend it to those who wish to know what these innocent victims have suffered, trusting that it may do something to sustain that interest in the sorely afflicted Christian Churches of the East,, which has been manifested in both countries, and hoping also that the charitable aid so generously extended to them in their calamities may be continued. The need of relief is still very great and it is for their Christian faith, to which they have clung during centuries of oppression and misery, that they have now again had to suffer. 22rd July, 1920. ...