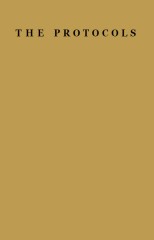 Author : Nilus Sergei
Title : The Protocols and World Revolution Protocols of the meetings of the zionist men of wisdom
Year : 1920

THE world is in the midst of a crisis not less serious than that of the great war. While it was inevitable that the period following the war should be fraught with grave problems for civilization, these problems have been made much more difficult by the presence of a new danger, namely, the destructive force of Bolshevism. Russia was the first victim of what proves to be a movement of an international character, Russia being used as the base of operations. While powerful Bolshevist armies are overrunning Asia and menacing the European countries to the West, an equally dangerous force of Red propagandists, directed from Moscow, is operating on several continents, spreading its social poison throughout the world and threatening the destruction of the social and industrial morale of civilized nations. With the triumph of the Bolshevist revolution in Russia, a group of internationalists, most of whom were members of the Jewish race, seized the machinery of government and have held it ever since. The complete destruction of Russian civilization, which for centuries had been essentially a Christian civilization, and the reduction of the great majority of the Russian people to a state of abject misery and ruin, are accomplished facts. The Bolshevist leaders, however, not content with this destruction and the establishment of a cruel despotism in Russia, are making every effort to extend their revolution and their control to other countries. ...