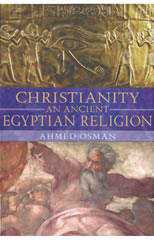 In Christianity: An Ancient Egyptian Religion author Ahmed Osman contends that the roots of Christian belief spring not from Judaea but from Egypt. He compares the chronology of the Old Testament and its factual content with ancient Egyptian records to show that the major characters of the Hebrew scriptures - including Solomon, David, Moses, and Joshua - are based on Egyptian historical figures. He further suggests that not only were these personalities and the stories associated with them cultivated on the banks of the Nile, but the major tenets of Christian belief - the One God, the Trinity, the hierarchy of heaven, life after death, and the virgin birth - are all Egyptian in origin. He likewise provides a convincing argument that Jesus himself came out of Egypt. With the help of modern archaeological findings, Osman shows that Christianity survived as an Egyptian mystery cult until the fourth century A.D., when the Romans embarked on a mission of suppression and persecution. In A.D. 391 the Roman-appointed Bishop Theophilus led a mob into the Serapeum quarter of Alexandria and burned the Alexandrian library, destroying all records of the true Egyptian roots of Christianity. The Romans’ version of Christianity, manufactured to maintain political power, claimed that Christianity originated in Judaea. In Christianity: An Ancient Egyptian Religion Osman restores Egypt to its rightful place in the history of Christianity. Ahmed Osman was born in Cairo in 1934 and is the author of The Hebrew Pharaohs of Egypt, Moses and Akhenaten, and Jesus in the House of the Pharaohs. He lives in England. ...