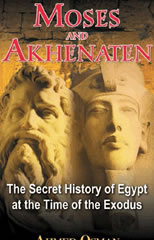 Author : Osman Ahmed
Title : Moses and Akhenaten The secret history of Egypt at the time of the exodus
Year : 2002

Preface. I Came to London from Cairo a quarter of a century ago, intending to devote most of my time to trying to establish links between the Bible and what we know, from a variety of sources, of Egyptian history. The choice of London was dictated by the far superior research facilities to be found there. Initially, while earning a living by teaching Arabic, I embarked on a course of intensive study. I enrolled in the Egypt Exploration Society and spent six years familiarizing myself with the ancient history of my country and mastering hieroglyphics. I also learned Hebrew and studied the Bible. However, when I tried to put this knowledge to use I found myself facing the same problem that had baffled scholars for more than a century - establishing a starting point by identifying a major biblical figure as a major figure in Egyptian history. Who was Joseph, the Patriarch who brought the tribe of Israel down to Egypt from Canaan? Who was the unnamed Pharaoh who appointed him as a senior minister, the virtual ruler of the country in the king's name? Who was Moses? If, as I believed, the Old Testament was fundamentally a historical work, the characters who appear in its stories had to match characters in Egyptian history. ...