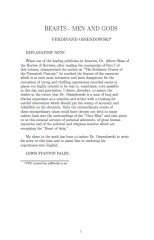 INTO THE FORESTS. In the beginning of the year 1920 I happened to be living in the Siberian town of Krasnoyarsk, situated on the shores of the River Yenisei, that noble stream which is cradled in the sun-bathed mountains of Mongolia to pour its warming life into the Arctic Ocean and to whose mouth Nansen has twice come to open the shortest road for commerce from Europe to the heart of Asia. There in the depths of the still Siberian winter I was suddenly caught up in the whirling storm of mad revolution raging all over Russia, sowing in this peaceful and rich land vengeance, hate, bloodshed and crimes that go unpunished by the law. No one could tell the hour of his fate. The people lived from day to day and left their homes not knowing whether they should return to them or whether they should be dragged from the streets and thrown into the dungeons of that travesty of courts, the Revolutionary Committee, more terrible and more bloody than those of the Mediaeval Inquisition. We who were strangers in this distraught land were not saved from its persecutions and I personally lived through them. One morning, when I had gone out to see a friend, I suddenly received the news that twenty Red soldiers had surrounded my house to arrest me and that I must escape. I quickly put on one of my friend’s old hunting suits, took some money and hurried away on foot along the back ways of the town till I struck the open road, where I engaged a peasant, who in four hours had driven me twenty miles from the town and set me down in the midst of a deeply forested region. On the way I bought a rifle, three hundred cartridges, an ax, a knife, a sheepskin overcoat, tea, salt, dry bread and a kettle. I penetrated into the heart of the wood to an abandoned half-burned hut. From this day I became a genuine trapper but I never dreamed that I should follow this role as long as I did. The next morning I went hunting and had the good fortune to kill two heathcock. I found deer tracks in plenty and felt sure that I should not want for food. However, my sojourn in this place was not for long. Five days later when I returned from hunting I noticed smoke curling up out of the chimney of my hut. I stealthily crept along closer to the cabin and discovered two saddled horses with soldiers’ rifles slung to the saddles. Two disarmed men were not dangerous for me with a weapon, so I quickly rushed across the open and entered the hut. From the bench two soldiers started up in fright. They were Bolsheviki. On their big Astrakhan caps I made out the red stars of Bolshevism and on their blouses the dirty red bands. We greeted each other and sat down. The soldiers had already prepared tea and so we drank this ever welcome hot beverage and chatted, suspiciously eyeing one another the while. To disarm this suspicion on their part, I told them that I was a hunter from a distant place and was living there because I found it good country for sables. They announced to me that they were soldiers of a detachment sent from a town into the woods to pursue all suspicious people. ”Do you understand, ’Comrade,’” said one of them to me, ”we are looking for counter-revolutionists to shoot them?” I knew it without his explanations. All my forces were directed to assuring them by my conduct that I was a simple peasant hunter and that I had nothing in common with the counter-revolutionists. I was thinking also all the time of where I should go after the departure of my unwelcome guests. It grew dark. In the darkness their faces were even less attractive. They took out bottles of vodka and drank and the alcohol began to act very noticeably. They talked loudly and constantly interrupted each other, boasting how many bourgeoisie they had killed in Krasnoyarsk and how many Cossacks they had slid under the ice in the river. Afterwards they began to quarrel but soon they were tired and prepared to sleep. All of a sudden and without any warning the door of the hut swung wide open and the steam of the heated room rolled out in a great cloud, out of which seemed to rise like a genie, as the steam settled, the figure of a tall, gaunt peasant impressively crowned with the high Astrakhan cap and wrapped in the great sheepskin overcoat that added to the massiveness of his figure. He stood with his rifle ready to fire. Under his girdle lay the sharp ax without which the Siberian peasant cannot exist. Eyes, quick and glimmering like those of a wild beast, fixed themselves alternately on each of us. In a moment he took off his cap, made the sign of the cross on his breast and asked of us: ”Who is the master here?” I answered him. ...