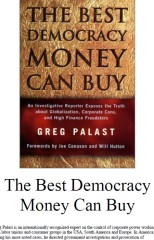 Greg Palast is an internationally recognized expert on the control of corporate power working with labor unions and consumer groups in the USA, South America and Europe. In America, among his more noted cases, he directed government investigations and prosecution of racketeering by nuclear plant builders and, for the Chugach Natives of Alaska, probed charges of fraud by oil companies in the grounding of the Exxon Valdez. Five years ago, Palast turned his investigative skills to journalism. His 1998 undercover exposé of corruption at the heart of Tony Blair’s cabinet, “Lobbygate,” earned him the distinction of being the first journalist in memory berated personally on the floor of Parliament by a prime minister—as well as an award for Story of the Year. His column for Britain’s Observer newspaper, “Inside Corporate America,” and other writings, have won him the Financial Times David Thomas Prize (1997) and nomination as Business journalist of the Year (1999). In America, Palast broke the story of how Katherine Harris and Jeb Bush removed thousands of Black and Democratic voters from registration roles prior to the presidential election. The series of revelations appeared in The Nation, the Washington Post, Harper’s, the Guardian—and in Salon.com which named the exposé Politics Story of the Year. Palast’s investigative reports can also be seen on BBC Television—“Newsnight’s own Sam Spade.” Publication of Democracy and Regulation, Palast’s lectures at Cambridge University and the University of Sao Paulo, coauthored by Theo MacGregor and Jerrold Oppenheim, is forthcoming. He divides his time between London and New York. ...