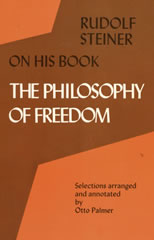 Introduction. More than seventy years have passed since the first appearance of The Philosophy of Freedom. After that, a quarter of a century elapsed before Rudolf Steiner made up his mind to bring out a second edition of the book. “It would have been possible to keep on publishing new editions,” he said at the time, “and I don't doubt they would have found a market. But that would just have meant only that The Philosophy of Freedom sold well. In the case of my more basic writings I was never interested in having lots of copies floating around the world. My real concern was to have these writings understood and the impulse in them actually working.” Many further editions have been published since these words were spoken. The time now seems ripe to bring together what Rudolf Steiner himself said and wrote by way of furthering an understanding of this book and of the goal he intended it to serve. No other book Rudolf Steiner wrote was as often and exhaustively discussed by him as The Philosophy of Freedom. He not only refers to it, as in the case of others of his writings, to call attention to some particularly interesting matter treated in its pages; he points again and again and yet again, from every imaginable angle, to what he intended this work to accomplish-indeed, to initiate. The reader will see from the chronological listing of Steiner's comments included at the end of this volume that from 1905 until his death in 1925 not a year passed without some discussion of this first work. The list does not pretend to be complete, however. It would have to include many further references to achieve the status of a true archive, but that task can be undertaken at leisure. Meanwhile, the listing in the appended table may be regarded as containing the most basic references. ...