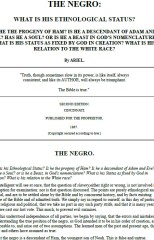 Author : Payne Buckner H. (Ariel)
Title : The negro What is his ethnological status ? Is he the progeny of ham ? Is he a descendant of Adam and Eve ? Has he a soul ? Or is he a beast in god's nomenclature ? What is his status as fixed by god in creation ? What is his relation to the white race ?
Year : 1867