Peacock Kenneth - Songs of the Doukhobors 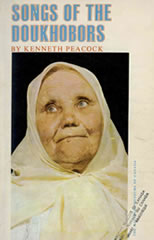 Foreword. When the National Museum of Canada began its research on Canadian folklore and folkmusic in the early years of the century, attention naturally was focused first on Canada's long-established cultures: Indian, Eskimo, British. Since that time the Museum archives and research publications have reflected the preponderance of materials from these native and founding cultures. As cultures of other ethnic origins grew and flourished, however, the Museum felt an increasing responsibility to investigate the rich traditions they have brought to contemporary Canadian life. The prospect of researching an additional thirty or forty cultures was indeed frightening, especially when we considered the problem of finding suitable specialists for each ethnic group. But when Kenneth Peacock agreed to undertake the project. we were confident that his broad knowledge of music, his wide field experience, and his versatile talents would assure the success of the initial project. His work among many Indian tribes had already brought to light much valuable material, and his extensive research in Newfoundland was later to become known through his threevolume collection Songs of the Newfoundland Outports (National Museum of Canada, 1965). ...