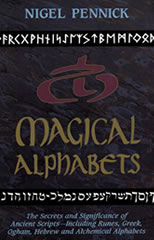 Introduction. A symbol is ever, to him who has eyes for it, some dimmer or clearer revelation of the God-like. HELENA BLAVATSKY. At a first, cursory glance, the subject of alphabets, secret or otherwise, may not appear to tell us much about the world and ourselves. But another, longer, look will show anyone of this opinion that he or she is wrong. Alphabets are one of the most highly sophisticated means by which we humans can try to gain some understanding of the world, and our place within it. When constructed properly, as all ancient ones are, each alphabet is metaphorical in nature. Language itself is a metaphor, for it represents objects and concepts whilst it is not those objects and concepts themselves. The very basis of language is metaphorical. We usually distinguish things by comparison; our basic description of the world around us is full of examples. When we ask, 'What is it ?', we tend to reply by making a comparison: we say it is like another thing which resembles it in some way, real or imagined. Within the described thing, object or quality, we seek some character by which it can be fitted into some human conceptual framework. We can see this process in action with reference to the human body. We speak of a body of water, a body of work, even a body of men. We speak of the head of a bed, a table, a page, a nail, a stream of water, a household or an organization. A clock has a face, just as does a playing card, a rock and a piece of planed wood. A hill has a brow, a cup possesses a lip, as does a crater; combs and gear-wheels have teeth, and a page has a foot. Weapons are called arms. ...