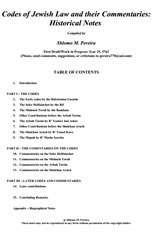 Introduction. Every single aspect of Jewish life is permeated by the demands and expectations placed on the Jew by the Torah and its Laws. Jewish Law is rooted in the Written Torah and fully expounded in the Oral Law as presented in the Mishnah and the Talmud. Indeed, it can be said that in their own way the Mishnah and the Talmud are themselves the first compilations or codifications of Jewish Law. Extracting from the Talmud the practical laws applicable to the different aspects of one’s life, however, poses quite a challenge. There are different reasons why that is the case. First, the Talmud does not read as a code of Jewish Law but rather as a flow of intertwined legal, aggadic, and other materials. Furthermore, often the presentation of halachic materials focuses on expounding possibilities and do not leave a clear ruling. Finally, since Torah is a way of life there is a constant need to apply Jewish Law to new situations which in itself creates a body of new jurisprudence. From all these reasons, almost from the moment the redaction of the Talmud was concluded the need arose to codify Jewish Law in a way to make it less unyielding for the Torah scholar and the common Jew alike. Part I on these notes focuses on such codes, in particular on the Rif, the Mishneh Torah, the Arbah Turim, and the Shulchan Aruch as well as many other contributions in-between these major codes. One of the fascinating aspects of the codifications of Jewish Law, however, is that despite their intention of simplifying the halachic issues they tend to generate a vast body of halachic literature in the direct proportion to their success and acceptance. Much of this halachic literature is in the form of Shailot and Teshuvot (Questions and Answers). There are, however, a significant number of major commentaries on the main codes of Jewish Law that have reached such prominence that they are typically printed with the code they are a comment on. These commentaries are called in general Nosei Keilim, the Arm-Bearers. Part II of these notes provides a discussion of some of the major commentaries on the Rif, the Mishneh Torah, the Tur, and the Shulchan Aruch. This work is a simple and superficial attempt to provide an overview of the most important efforts on codification of Jewish Law and how they fit together. There is no way, however, that it could be even remotely close to exhaustive. This is because the best halachic minds of generation upon generation of the best Jewish minds have poured their efforts of Limud Torah into writing codes, commentaries on the codes, or sometimes notes and clarifications, often hand-written, on all the codes and commentaries brought forth by the previous generations. This being the case one could not hope for more than scratching the surface of this vast ocean of vital efforts. ...