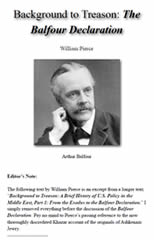 Editor’s Note : The following text by William Pierce is an excerpt from a longer text, “Background to Treason: A Brief History of U.S. Policy in the Middle East, Part 1: From the Exodus to the Balfour Declaration.” I simply removed everything before the discussion of the Balfour Declaration. Pay no mind to Pierce’s passing reference to the now thoroughly discredited Khazar account of the originals of Ashkenazi Jewry. The middle of the 19th century saw a growing restlessness in the Jews of eastern and central Europe. The Industrial Revolution and all the changes in trade, transportation, and life-styles that came with it had broken up old patterns and created new opportunities, and the Jews began reorganizing themselves to take advantage of these. They created two new movements: one, preaching internationalism and class warfare was directed primarily toward the Gentiles. It was Communism, and its principal founder was the Jew Karl Marx. The other, directed toward the Jews only, preached Jewish nationalism and solidarity It was Zionism, and one of its first proponents was Moses Hess, a close associate and friend of Marx. Hess’s book Rome and Jerusalem, published in 1862, was one of the seminal documents of the Zionist movement. ...