Pierce William Luther - Who We Are 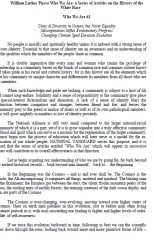 Author : Pierce William Luther
Title : Who We Are: a Series of Articles on the History of the White Race
Year : 1966

Unity & Diversity in Nature, but Never Equality. Miscegenation Stifles Evolutionary Progress. Changing Climate Sped Eurasian Evolution. No people is morally and spiritually healthy unless it is imbued with a strong sense of its own identity. Essential to that sense of identity are an awareness and an understanding of all the qualities which the members of the people share in common. It is doubly imperative that every man and woman who claims the privilege of membership in a community based on the bonds of common race and common culture knows and takes pride in his racial and cultural history, for in this history are all the elements which give his community its unique character and differentiate its members from all those who are not members. When such knowledge and pride are lacking, a community is subject to a host of ills and cannot long endure. Solidarity and a sense of responsibility to the community give place to special-interest factionalism and alienation. A lack of a sense of identity blurs the distinction between compatriot and stranger, between friend and foe, and leaves the community prey to the greed or malice of aliens as well as of its own pathological members, who will grow mightily in numbers as loss of identity proceeds. The National Alliance is still very small compared to the larger national-racial community of which it is a part, yet if it is to grow someday into a truly effective community of blood and spirit which can serve as a nucleus for the regeneration of the larger community, it must begin now the process of education which will later serve as a model for the reeducation of our whole people. NATIONAL VANGUARD serves this purpose, and it is hoped that the series of articles entitled "Who We Are" which will appear in successive issues will contribute to its overall effectiveness in that direction. Let us begin acquiring our understanding of who we are by going far, far back beyond our earliest historical records ... back beyond man himself ... back to ... the Beginning. In the Beginning was the Cosmos -- and is and ever shall be. The Cosmos is the Whole, the All-encompassing. It comprises all things, material and spiritual. The blazing suns of the firmament; the formless gas between the stars; the silent, frozen mountain peaks of the moon; the rustling trees of earthly forests; the teeming creatures of the dark ocean depths; and man are parts of the Cosmos. The Cosmos is ever-changing, ever-evolving, moving toward ever higher states of existence. Here on earth man partakes in this evolution, just as before man other living creatures partook in it, with each succeeding eon leading to higher and higher levels of order, of life, of self-awareness. ...