Piggott Stuart - The dawn of civilization 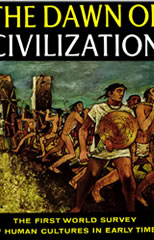 Foreword. Almost exactly three years ago the initial scheme for The Dawn of Civilization saw its first light - not unsuitably - amongst the stones of Stonehenge. Now as the project reaches its final stages, these lines are being written in the shadow of London's British Museum. This chance link between the library shelves and showcases of Bloomsbury and the grey sarsens of Salisbury Plain is in a way emblematic of the aims of this book-to bring together not only the visible remains of man's past achievements but the less impressive though no less important minutiae of the scholar, the pot-sherds, plans, and sections which are the archaeologist's basic tools no less than his trowel. The Dawn of Civilization has been from the start a co-operative venture; nor could' it have been otherwise. In the first place, the editing of such a complex volume has been made possible only by the nnremitting work of Mr J. V. S. Megaw, who has acted throughout as my Assistant Editor. He has nndertaken innumerable tasks of research; liaison and co-ordination, and above all has made himself mainly responsible, in co-operation with the authors, for the illustrations which we feel form so essential and notable a part of the work. Here, with infinite patience and the eyes of an expert, Mrs Eva Neurath has made us steer a strict course between the archaeologically necessary and the artistically valuable. In a subject where the expert all too often seems to be one who learns more and more about less and less it has been our good fortnne to work with authors, all scholars in their own right, but whose interests also embrace fields outside their own. As a result each separate chapter though designed as an entity contributes to the general underlying theme of man's development as a social animal. The cooperation of the authors has gone far beyond the arduous preparation of texts; their advice-and criticism-has been invaluable in the collection and preparation of illustrations and material for the rnnning captions for the half-tone sections which have been the responsibility of the publishers. These last have been prepared as a parallel commentary to the main texts, to describe in words the points made by the pictorial matter; if the captions succeed in this aim the Editor at least will be gratified. With regard to the texts in general, Mr Max Parrish has been a tower of strength, as helpful as he has been selfeffacing. One note of warning; in three years much work has been done on old material and much new fonnd and thus it must be remembered that time and not always carelessness is responsible for some omissions and inaccuracies which may present themselves to the discerning reader. As we go to press Hactlar has revealed new splendours and Knossos added more problems to those of past seasons, while in Africa the dawn of man himself is receding ever further. The illustrations have presented a major task solved not only by the travels of photographers (whose commissions in one case led by Land-Rover from Athens to Karachi) and architects preparing reconstructions sometimes on the very sites concerned, but also through the kindness of those many government departments, institutions, and individuals mentioned by name in the List and Sources of Illustrations. Over and above these it would only be courtesy to single out for their ready assistance in affording special photographic facilities the Directors of the Government Archaeological Services of Cyprus, Greece, Iran, Iraq, the Lebanon, Pakistan, and Turkey. The Chinese People's Association for Cultural Relations with Foreign Conntries, the Griffith Institute, Ashmolean Museum, Oxford, the Society for Cultural Relations with the U.S.S.R., and the Trade Delegation of the U. S. S. R. in the U.K. have been agents in obtaining some unique source material. Mr Megaw feels that on countless occasions he may have tried, but not it is hoped exhausted, the patience of many friends and colleagues. In this connection he is particularly grateful to the following members of the staff of the British Museum: Dr R. D. Barnett, Mr J. W.Brailsford, Mr Adrian Digby, Mr R.A.Higgins, Mr T. G. H. James, and Dr D. J. Wiseman. Learned libraries have also rendered sterling service, chief amongst them being those of the Institute of Archaeology, University of London (Miss Joan du Plat Taylor and Miss G. C. Talbot), the Department of Egyptology, University College, London (Miss K. E. Cynthia Cox), and the Society of Antiquaries of London (Mr John Hopkins). If any source has gone. nnacknowledged through ignorance or neglect the fault is entirely that of the Editor and Assistant Editor. They must be held responsible for such omissions. Finally I have written elsewhere in this volume that it has been our purpose throughout not only to interest but to excite. If this should indeed be the impact of The Dawn of Civilization on both scholar and layman then we shall feel that three years have not been spent in vain. Stuart Piggot. London-Edinburgh-Harvard March 1961. ...