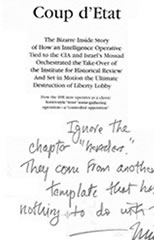 Author : Piper Michael Collins
Title : Coup d'Etat The bizarre inside story of how an intelligence operative tied to the CIA and Israel's Mossad Orchestrated the take-over of the Institute for Historical Review and Set in Motion the Ultimate destruction of Liberty Lobby. How the IHR now operates as a classic Soviet-style "trust" name-gathering operation - a "controlled opposition"
Year : 2015

Coup d'etat : The Illegal Seizure of the Institute for Historical Review And the Opening Guns of the Campaign to Destroy Liberty Lobby. On October 15, 1993 a shocking and quite violent row erupted at the longtime headquarters, in Costa Mesa, California, of the Institute for Historical Review, a historical revisionist research institute originally established by Willis Carto and his wife Elisabeth in 1978. The events that took place that day set in motion, over the next decade that followed, a chain of circumstances that left the IHR virtually moribund and in 2001 brought about the total destruction of Liberty Lobby, the Washington, D. C.based populist institution (first founded by the same aforementioned Willis Carto in 1955). A detailed examination of the personalities and events involved in this sordid affair demonstrates-beyond any question-that the IHR affair and the subsequent evisceration of Liberty Lobby, longtime publisher of the once-vibrant national weekly newspaper, The Spotlight, were the consequences of a long-planned and carefully calculated conspiracy by Judas Goats acting on behalf ofThe Enemy Within. First of all, in exploring this amazing story, it is important to delineate the differences between the IHR and Liberty Lobby, which had always been entirely separate institutions, despite the fact that both had been founded by Carto. ...