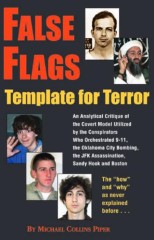 An analytical critique of the covert model utilized by the conspirators who orchestred 9-11, the Oklahoma bombing, the JFK assassination, Sandy Hook and Boston. The "how" and "why" as never explained before... Michael Collins Piper's controversial writing have been translated into multiple languages and distributed all over the world. False Flags may well be his most extraordinary work yet - a final judgement on the reality of modern terrorism... ...