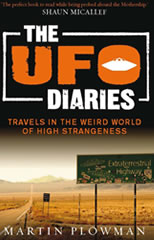 Prologue. My life as a ufo logy-ologist. I never thought I’d grow up to be a grave robber. It may well be the world’s third oldest profession after politics and you-knowwhat, and I hear the pay is good as long as you don’t mind working with a bunch of stiffs, but grave robbing just doesn’t have the romantic appeal of, say, arms dealer, nor the dinner party cachet of Peace Corps volunteer. What did you do in Peru, Martin ? people would ask me back home, and I would have to say something like, ‘I trespassed upon the burial grounds of civilisations that were old before the country I was born in even existed.’ Unfortunately my camera would be stolen on a bus exactly two days later as I left the plateau of Marcahuasi to return to Lima, Peru’s smog-bound capital, so I don’t even have the photos to prove my guilt. Mercifully, the tomb was empty. All that remained were the dry-mortared stonewalls perhaps five feet in height, with a tiny square entrance on one side through which the shrunken, mummified corpse of the ancient lord would’ve been interred. I breathed a sigh of relief. There was nothing to disturb here; any remains once laid to rest in the tomb had been stolen or removed many years ago, and I was just a visitor en route to my own eventual destination. ...