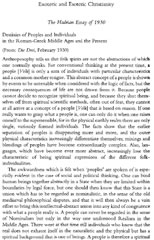 The Hadrian Essay of 1930. Destinies of Peoples and Individuals in the Roman-Greek Middle Ages and the Present. (From: Die Drei, February 1930). Anthroposophy tells us that folk spirits are not the abstractions of which one normally speaks. For conventional thinking at the present time, a people (Volk) is only a sum of individuals with particular characteristics and a common mother tongue, This abstract concept of a people is shown by events to be untenable when considered with the logic of facts, but the necessary consequences of life are not drawn from it. Because people cannot decide to recognize spiritual being, and because they shut themselves off from spiritual scientific methods, often out of fear, they cannot at all arrive at a concept of a people (Volk) that is based on reason, If one really wants to grasp what a people is, one can only do it when one raises oneself to the supersensible, for in the physical earthly realm there are only single, variously formed individuals. The facts show that the earlier separation of peoples is disappearing more and more, and the outer physical characteristics increasingly differentiate themselves; mixings and blendings of peoples have become extraordinarily complex. Also, languages, which have become ever more abstract, increasingly lose the characteristic of being spiritual expressions of the different folkindividualities. ...