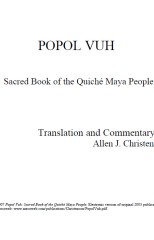 Translator's preface. A little over twenty years ago I helped to compile a dictionary in the Quiché-Maya language in the mountains of northwestern Guatemala near a small village called Chihul. At the time, Quiché was almost completely an orally-communicated language, with very few native speakers who could read or write it. One summer evening, after a long day of work with one of my best sources, I realized that I had lost track of time and needed to hurry down to the valley where I had a small home before it got dark. The region had no electricity and hiking steep mountain trails at night was dangerous, particularly because of the numerous packs of wild (and often rabid) dogs that roamed freely about. I therefore started down a small footpath that appeared to be a more direct route than the usual winding road taken by buses. About a third the way down the mountainside, I passed an isolated adobe and thatch house built in a clearing surrounded by pine forest. A small group of men were seated on a low wooden bench in front of the house conversing. When they saw me, they called out a greeting and beckoned me to join them. After introductions were properly exchanged, a requirement in formal Quiché conversation, I was offered a warm cup of toasted corn coffee and a space on the bench was opened up for me to sit down. One of the men had heard that there was a fair-skinned young man that people called raqän us (mosquito legs) who was visiting in Chihul, and he asked if that would be me. My name is difficult to pronounce in Quiché, so I had been given that rather unfortunate nickname, derived no doubt from my lanky physique in those days. I told him that I was the one they had heard about. They asked what I was doing, and I explained that I was interested in collecting the words of his people so that I could carry them with me back to my own town beyond the mountains to the north. Another of the men was curious as to how I could “collect” words and carry them away, since he assumed that his language could only be spoken, not written. Quichés in that area had, of course, seen documents and books like the Bible written in Spanish but had little conception at that time that it was possible to use phonetic letters to record their own language. This is a great tragedy, because until about five hundred years ago the Maya were the most literate people in the Americas, preserving their history and culture with a sophisticated hieroglyphic script in hundreds of folded screen books. The Spanish conquest in the early sixteenth century was a devastating blow to Maya literacy in Mexico and Guatemala. Christian missionaries burned great numbers of hieroglyphic texts in an attempt to eradicate indigenous religious practices. Native scribes were singled out for persecution to such an extent that within one hundred years, the art of hieroglyphic writing had virtually disappeared from among the Maya people. My new friends were therefore very interested in the notes I had written that day in their language. Excited by the possibility of preserving their own thoughts in written form, they asked me to demonstrate how to write a number of words and phrases. After writing a few phrases for them in Quiché, I asked the oldest of them if he would like me to write something for him. He said that he did and I waited a long time for the words he wished me to write. Finally he asked me to record a few brief words of counsel for his son. ...