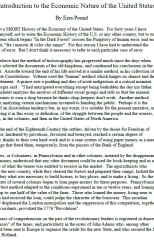 This is not a SHORT History of the Economy of the United States. For forty years I have schooled myself, not to write the Economic History of the U.S. or any other country, but to write an epic poem which begins "In the Dark Forest" crosses the Purgatory of human error, and ends in the light, "fra i maestri di color che sanno". For this reason I have had to understand the NATURE of error. But I don't think it necessary to refer to each particular case of error. I do not believe that the method of historiography has progressed much since the days when Confucius selected the documents of the old kingdoms, and condensed his conclusions in the Testament. Aristotle toward the end of his life arrived at a similar method, in his collection of Greek State Constitutions. Voltaire used the "human" method which hinges on chance and the personal element. A prince eats a pudding and dies of acute indigestion at a critical moment. Caesar Borgia said : "I had anticipated everything except being bedridden the day my father died." Michelet analyzes the motives of different social groups and tells us that the manual labourer wants to own a shop because he thinks shop-keepers don't work. Another method consists in analyzing certain mechanisms invented to humbug the public. Perhaps it is the renewal of an Aristotelian tendency but, in any event, it is suitable for the present narrative, and I am following it in this essay or definition, of the struggle between the people and the usurers, or financiers, in the colonies, and then in the United States of North America. Towards the end of the Eighteenth Century the settlers, driven by the desire for Freedom of Conscience, hardened by privations, favoured and betrayed, reached a certain degree of prosperity, thanks to their own hard work and to a sane system of using paper money as a means of exchange that freed them, temporarily, from the pincers of the Bank of England. The Settlers, or Colonizers, in Pennsylvania and in other colonies, irritated by the disappearance of metal money, understood that any other document could be used for book-keeping and as a certificate of what the bearer was entitled to receive in the market. The agriculturists who arrived in the new country, while they cleared the forests and prepared their camps, lacked the power to buy what was necessary to build houses, to buy plows, and to make a living. So the governments of several colonies began to loan paper-money for these purposes. Pennsylvania chose the best method adapted to the conditions-repayment in ten or twelve years, and loaning amounts up to one half of the value of the farm. Those who loaned the money, living near to those who had received the loan, could judge the character of the borrower. This arcadian simplicity displeased the London monopolists and the suppression of this competition, together with other irritants, provoked the 1776 "Revolution". The clearness of comprehension on the part of the revolutionary leaders is registered in diaries and "memoirs" of the times, and particularly in the notes of John Adams who, among other things, had been sent to Europe to organise the credit for the new State, and who secured the first loan from Holland. ...