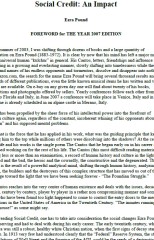 Foreword for the year 2007 edition. In the summer of 2003, I was shifting through dozens of books and a large quantity of information on Ezra Pound (1885-1972). It is clear by now that his mind has left a major mark on the universal human “kulchur” in general. His Cantos, letters, friendships and influence keep resonating in a growing and everlasting manner, slowly shifting into timelessness while the works and names of his endless opponents and tormentors, dissolve and disappear into nothing. On amazon.com, the search for the name Ezra Pound will bring several thousand results and hundreds of different publications, even the little known musical items he has written and videos on him are available. On e-bay on any given day one will find about twenty of his books, publications and photographs offered by sellers. Yearly conferences follow each other from Idaho to Florida and Italy, in June 2007 a conference will take place in Venice, Italy and in June 2008 one is already scheduled in an alpine castle in Merano, Italy. Pound has been propelled by the sheer force of his intellectual power into the forefront of western culture again, regardless of the constant, incoherent whining of his opponents about “treason” and his supposed mental problems. Just what is the force that he has applied in his work, what was the guiding principle that kept moving him to the top while millions of others were dissolving into the shadows? At the center of his life and his works is the single poem The Cantos that he began early on in his career and continued working on for the rest of his life. The Cantos (this most difficult reading material) is nothing less or more than an examination, a record of human history and culture in the light of the good and the bad, the heroic and the cowardly, the constructive and the degenerated. The Cantos is the result of a powerful analytical mind, shifting through human history, analyzing the players, the builders and the destroyers of this complex structure that has moved us out of the stone age toward the light that we have been seeking forever - “The Poundian Struggle.” The Cantos reaches into the very center of human existence and deals with the issues, decade by decade, century by century, player by player in a rather non compromising manner and some of those who have been found too light happened to come to control the entry doors to the mental institutions in the United States of America in the Twentieth Century. “The inmates running the loony-house!” as some might say. While reading Social Credit, one has to take into consideration the social changes Ezra Pound was observing and had to deal with during his early career. The early twentieth century, when America was still a robust, healthy white Christian nation, when the first signs of decay started to develop. In 1913 very few had understood clearly that the “Federal” Reserve System, the starting manipulations of Wall Street and the forming of the ADL could be the seeds of a destructive process for America. The analytical genius of Pound was adding up these events decades before the average political mind. He followed the destructive murderous rampage in Russia as the first communist revolution under an overwhelming Jewish supervision that ground down nation after nation, killing tens of millions of White Christians. It was his job, his sacred duty to discover the weaknesses in the Western Societies that had exposed them to future failure. This work left him no space to compromise. He had established early in his career usury as a major problem in our social structures. The “Federal” Reserve system by any means was recognized by him as an institutionalized form of usury, on a scale that has never been seen before. The concept of the system is rather simple and once we understand it, it is rather clear: We have been living together with the largest, most widespread criminal conspiracy since 1913. The roots of this problem went all the way back to Presidents Lincoln and Garfield. Lincoln had issued his Greenback, noninterest- bearing notes and Garfield had taken a hard stand on currency problems just before he was assassinated. Next in line was John F. Kennedy, who had already started the process of issuing money, controlled by congress. It seems that the standard punishment for US Presidents for trying to take control of the monetary system was public execution, with a bullet to the head. ...