Pound Ezra Weston Loomis - What is money for ? 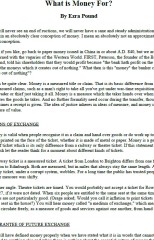 We will never see an end of ructions, we will never have a sane and steady administration until we gain an absolutely clear conception of money. I mean an absolutely not an approximately clear conception. I can, if you like, go back to paper money issued in China in or about A.D. 840, but we are concerned with the vagaries of the Western World. FIRST, Paterson, the founder of the Bank of England, told his shareholders that they would profit because "the bank hath profit on the interest of all the moneys which it creates out of nothing." What then is this "money" the banker can create out of nothing"? Let us be quite clear. Money is a measured title or claim. That is its basic difference from unmeasured claims, such as a man's right to take all you've got under war-time requisition, or as an invader or thief just taking it all. Money is a measure which the taker hands over when be acquires the goods he takes. And no further formality need occur during the transfer, though sometimes a receipt is given. The idea of justice inheres in ideas of measure, and money is a measure of value. MEANS OF EXCHANGE. Money is valid when people recognise it as a claim and hand over goods or do work up to the value printed on the face of the ticket, whether it is made of metal or paper. Money is a general sort of ticket which is its only difference from a railway or theatre ticket. If this statement seems childish let the reader think for a moment about different kinds of tickets. A railway ticket is a measured ticket. A ticket from London to Brighton differs from one for London to Edinburgh. Both are measured, but in miles that always stay the same length. A money ticket, under a corrupt system, wobbles. For a long time the public has trusted people whose measure was shifty. Another angle. Theatre tickets are timed. You would probably not accept a ticket for Row H, Seat 27, if it were not dated. When six people are entitled to the same seat at the same time the tickets are not particularly good. (Orage asked; Would you call it inflation to print tickets for every seat in the house?) You will hear money called "a medium of exchange," which means that it can circulate freely, as a measure of goods and services against one another, from hand to hand. ...