Beard Charles Austin - President Roosevelt and the coming of the war, 1941 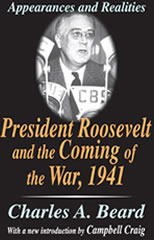 Transaction introduction. During the late 1930s, and indeed up until the Japanese attack on Pearl Harbor, Charles Beard strongly opposed American policies and actions that threatened to lead to the nation’s involvement in the Second World War. Like many other Americans of the day, Beard believed that the United States had no essential interest in waging war in Europe or East Asia, and that the long-standing tradition of American detachment from great-power conflict, violated briefly and unhappily during the years 1917-19, was a cornerstone of American democracy and virtue not to be abandoned again. Like most other Americans, Beard had no sympathy for Nazi Germany or Imperial Japan, and he wished their adversaries in Europe and Asia well. But the wars ignited by German and Japanese expansion were the concern of Europeans and Asians, not Americans. To preserve the anti-militaristic and decentralized nature of American democracy, Beard believed, the United States had to stay of out of the fighting. Nations under attack, Beard wrote, can defend themselves. ...