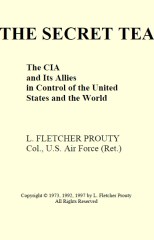 Author : Prouty Leroy Fletcher
Title : The Secret Team The CIA and its allies in control of the United States and the World
Year : 1973

Author's note : 1997. After I had given the manuscript of the original draft of this book to my editor at Prentice-Hall, in 1972; and had received the galley proof of the first edition back from him, he called me to suggest that I keep it in a safe place at all times. He told me that his home had been broken into the night before, and he suspected it was an attempt to steal his copy of that galley proof. He said, "They didn't get it. It was under the seat of the Volkswagon." A few days later a nationwide release by the well-known Washington columnist, Jack Anderson, appeared across the country, "Book Bares CIA's Dirty Tricks". In that column, Anderson reported that the CIA had contacted a well-known bookstore in Washington and asked one of the employees to see if he could get a copy of the galley from me, and agreed to pay him $500, if he did. I agreed to meet him at my home that evening. I suspected his call, but invited him anyway. In the meantime I set up a tape recorder in the umbrella stand near my front door and arranged for it to turn on when I switched on the overhead light on the front porch. With that arrangement, I recorded the whole visit including his final burst, "They promised me $500.00, if I got that galley proof." I took that tape to Anderson, and it was the basis of his March 6, 1973 column. The underground attack didn't quit there. After excellent early sales of The Secret Team during which Prentice-Hall printed three editions of the book, and it had received more than 100 favorable reviews, I was invited to meet Ian Ballantine, the founder of Ballantine Books. He told me that he liked the book and would publish 100,000 copies in paperback as soon as he could complete the deal with Prentice-Hall. Soon there were 100,000 paperbacks in bookstores all around the country. Then one day a business associate in Seattle called to tell me that the bookstore next to his office building had had a window full of books the day before, and none the day of his call. They claimed they had never had the book. I called other associates around the country. I got the same story from all over the country. The paperback had vanished. At the same time I learned that Mr. Ballantine had sold his company. I traveled to New York to visit the new "Ballantine Books" president. He professed to know nothing about me, and my book. That was the end of that surge of publication. For some unknown reason Prentice-Hall was out of my book also. It became an extinct species. Coincidental to that, I received a letter from a Member of Parliament in Canberra, Australia, who wrote that he had been in England recently visiting in the home of a friend who was a Member of the British Parliament. While there, he discovered The Secret Team on a coffee table and during odd hours had begun to read it. Upon return to Canberra he sent his clerk to get him a copy of the book. Not finding it in the stores, the clerk had gone to the Customs Office where he learned that 3,500 copies of The Secret Team had arrived, and on that same date had been purchased by a Colonel from the Royal Australian Army. The book was dead everywhere. The campaign to kill the book was nationwide and world-wide. It was removed from the Library of Congress and from College libraries as letters I received attested all too frequently. That was twenty years ago. Today I have been asked to rewrite the book and bring it up to date. Those who have the book speak highly of it, and those who do not have it have been asking for it. With that incentive, I have begun from page one to bring it up to date and to provide information that I have learned since my first manuscript. In the beginning, this book was based upon my unusual experience in the Pentagon during 1955-1964 and the concept of the book itself was the outgrowth of a series of luncheon conversations, 1969-1970, with my friends Bob Myers, Publisher of the New Republic, Charlie Peters, founder of The Washington Monthly, and Ben Schemmer, editor and publisher of the Armed Forces Journal, and Derek Shearer. They were all experienced in the ways and games played in Washington, and they tagged my stories those of a "Secret Team." This idea grew and was polished during many subsequent luncheons. After my retirement from the Air Force, 1964, I moved from an office in the Joint Chiefs of Staff area of the Pentagon to become Manager of the Branch Bank on the Concourse of that great building. This was an interesting move for many reasons, not the least of which was that it kept me in business and social contact with many of the men I had met and worked with during my nine years of Air Force duties in that building. It kept me up-to-date with the old "fun-and-games" gang. ...