Rawlings Ress John - The shaping of psychiatry by war 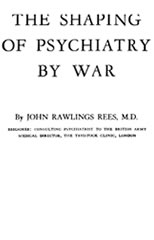 Foreword. There can hardly be a greater compliment paid to a British psychiatrist than that he should be invited to the United States to deliver these lectures which commemorate that very great man Doctor Thomas W. Salmon. As you may imagine, I am extremely sensible of that honour. I have always counted myself most fortunate to have met Doctor Salmon on my first visit to this country. Whilst acquiring the habit from some of you of speaking of him as Tom Salmon, I unfortunately never knew him well enough to be on those intimate terms with him. After his death, along with many other modest contributors to the Memorial Fund, I little dreamed that one day there might be the opportunity of paying some public tribute to the man who had impressed me so much. At that time few of us had any prevision of another war, and though it was common knowledge that he had played a big part in shaping and directing the psychiatry of the United States army during the 1914-18 war, I had no conception how great that contribution was. Volume ten of your United States Army Medical History had not been published then, or it had certainly not come to England, but in the year that preceded this present war and during the early years of hostilities, that volume, and in particular Colonel Salmon's contributions to it, were a "Bible" for military psychiatry in Britain. ...