Reed William - The phantom of the poles 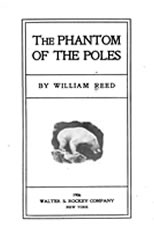 Introduction. This volume is not written to entertain those who read for amusement, but to establish and prove, so far as proof can be established and proved, a half-score or more of mighty truths hitherto not comprehended. This may seem boastful; but, when understood, I hope it will not be so considered; for. one key will unlock them all. Throw away the key, or refuse to use it, and the truths will remain securely locked in the archives of the unknowable, as they have been since man inhabited the earth. I fully realize that the task is herculean; but as Hercules performed his tasks, I hope to do likewise. I am aware that I also have one powerful giant to tackle; but the stone in my sling may land at the place at which it is aimed, and the giant Prejudice be laid low and be succeeded by that young stalwart, General Investigation. ...