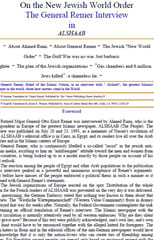 Foreword. Retired Major General Otto Ernst Remer was interviewed by Ahmed Rami, who is the correspondent in Europe of the greatest Islamic newspaper, ALSHAAB (The People). The interview was published on July 20 and 23, 1993, as a memento of Nasser's revolution of l9S2. ALSHAAB´s editorial office is in Cairo, in Egypt, and its readers live all over the Arab countries and in the Islamic centers of Europe. General Remer, who is continuously libelled a so-called "racist" in the jewish anti- German media, ascribing to him an "antiforeigner" attitude toward the men and women from Arab countries, is being looked up to as a model exactly by those people on account of his world outlook. The reaction among the people of Egypt and other Arab populations to the publication of this interview peaked in a powerful and unanimous acceptance of Remer's arguments. Never before have masses of the people embraced a political thesis in such a manner as it happened with General Remer's statements. The Jewish organizations of Europe reacted on the spot. Distribution of the whole edition for the French readers of ALSHAAB was prevented on the very day it was delivered. Upon questioning, the German Embassy stated that nothing was known to them about that interview. The "Westliche Wertegemeinschaft" (Western Value Community) froze in dismay and stayed that way for weeks after. Naturally, the Federal Government contemplates the task of obtaining an official translation of Remer's interview. The Islamic newspaper with the widest circulation is naturally attentively read by all western embassies. Why are they silent as the grave now? Because if this text were publicly acknowledged, one's own lies, one's own witch hunt would have to be renounced together with the alleged hatred for foreigners. The nation-haters in Bonn and in the editorial offices of the anti-German newspapers would have to acknowledge that it is only the nation-lovers who can create ties of friendship among peoples. For friendship among peoples can prevail only based on reciprocal respect with the provision that the masses of the peoples continue to inhabit their ancestral lands. ...