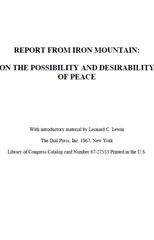 Foreword. "John Doe," as I will call him in this book for reasons that will be made clear, is a professor at a large university in the Middle West. His field is one of the social sciences, but I will not identify him beyond this. He telephoned me one evening last winter, quite unexpectedly; we had not been in touch for several years. He was in New York for a few days, he said, and there was something important he wanted to discuss with me. He wouldn't say what it was. We met for lunch the next day at a midtown restaurant. He was obviously disturbed. He made small talk for half an hour, which was quite out of character, and I didn't press him. Then, apropos of nothing, he mentioned a dispute between a writer and a prominent political family that had been in the headlines. What, he wanted to know, were my views on "freedom of information"? How would I qualify them? And so on. My answers were not memorable, but they seemed to satisfy him. Then, quite abruptly, he began to tell me the following story: Early in August of 1963, he said, he found a message on his desk that a "Mrs. Potts" had called him from Washington. When he returned the call, a MAN answered immediately, and told Doe, among other things, that he had been selected to serve on a commission "of the highest importance." Its objective was to determine, accurately and realistically, the nature of the problems that would confront the United States if and when a condition of "permanent peace" should arrive, and to draft a program for dealing with this contingency. The man described the unique procedures that were to govern the commission's work and that were expected to extend its scope far beyond that of any previous examination of these problems. Considering that the caller did not precisely identify either himself or his agency, his persuasiveness must have been a truly remarkable order. Doe entertained no serious doubts of the bona fides of the project, however, chiefly because of his previous experience with the excessive secrecy that often surrounds quasi-governmental activities. In addition, the man at the other end of the line demonstrated an impressively complete and surprisingly detailed knowledge of Doe's work and personal life. He also mentioned the names of others who were to serve with the group; most of them were known to Doe by reputation. Doe agreed to take the assignment - he felt he had no real choice in the matter - and to appear the second Saturday following at Iron Mountain, New York. An airline ticket arrived in his mail the next morning. ...