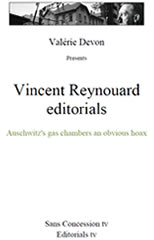 A false thesis always support itself on a false propaganda. Here are two excerpts from a report which, since the beginning of November 2008, is circulating around the world. Infolive.tv - The case of Auschwitz's plans published by "Bild" Bild's newspaper has published the original plans of the Auschwitz's "Nazi" extermination camp, they were discovered while an apartment in Berlin was being vacated. One of the plans clearly shows a gas chamber, while the other shows the location of the crematoria. Some of these plans are signed by some of the SS seniors high officials and one even includes the initials of the "Nazi" Heinrich Himmler. A sketch also shows the plan of the famous long building's entrance of the Auschwitz-Birkenau camp, where the exterminations took place in "gas chambers". A plan shows a first crematorium. According to a journalist from the Bild, this discovery will help historians in their research. Nearly one million of deportees, mostly Jews, perished in the death camp of Auschwitz, located in Poland, near Krakow. More than six millions Jews died under the "Nazis" regime. Auschwitz's liberation on January 25, 1945, by the Soviet troops have allowed the world to see the monstrous scale of the "Nazi" crimes. However, Holocaust denial is still present and continues to deny the extent of the Holocaust. Auschwitz plans represent for many historians the evidence of the "Nazi" horror. ...