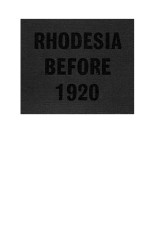 The land to which the first Europeans came to make their homes between the Limpopo and Zambezi rivers was virtually untouched by the modern world. The Pioneer Column arrived at the site of Salisbury 85 years ago in September 1890, and was followed by a small stream of settlers of various kinds and callings. The first arrivals found no roads, no towns, no farms, no mines, no industries or commerce. The indigenous peoples had their own social and cultural systems which had hardly changed for centuries. There were no written communications; no use was made of the wheel or the plough. In fact agriculture was designed merely to provide a basic subsistence. The area now known as Rhodesia lay in the path of the mass movements of people both southwards and northwards which characterised the earlier history of Southern and Central Africa. By the late nineteenth century the bulk of the people were of the various groupings known loosely as Shona with the warlike Matabele in the west, the latter being the dominant force. It was only in the kingdom of the Matabele that there was any form of European settlement before 1890 — a handfulof missionaries and traders whose numbers were supplemented from time to time by itinerant hunters, explorers and concession seekers. The early European settlers of Rhodesia came into a land with wide horizons and great potential, but where almost all the essentials of a western way of life had to be created from scratch. ...