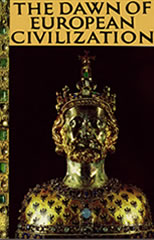 Introduction. The Myth of the 'Dark Ages'. David Talbot Rice. UNTIL NOT so LONG AGO it was sufficient for a student of the age in which we live to concern himself with a study of Europe, but the emergence of Russia, the development of Asia and, more recently, the assumption of independence by a mass of minor states in Mrica, have led to a widening of our horizons regarding the present, and a similar change has begun to assail our outlook towards the past. Thus the study of the early medieval phase of the culture of western Europe seemed until recently to be a comparatively simple and limited affair; it was enough for an Englishman to know something of the reigns of kings like Canute and Alfred, with perhaps a grounding in the warlike activities of Queen Boadicea against the Romans; for a Frenchman or a German some information about the wars of Charlemagne and his successors was enough, while an Italian could conveniently forget the whole age between the decline of imperial Roman power and the emergence of Florence in the 14th century. But now we are beginning to realize that a new, more comprehensive approach to our early history is necessary, and that today it is essential to pay very much more attention to certain aspects of man's life that were once wholly disregarded. Events in eastern Europe must thus be studied in addition to those in the west, while some consideration of the age of migrations and wanderings is just as necessary to a true understanding of later ages as an appreciation of the debt left by Rome. And further, it is essential to take into account the interaction of the various regions one upon another and of the influence that was exercised on the West by regions to the East, more especially Syria. ...