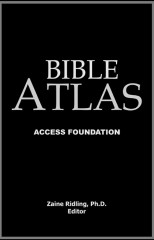 Almost every reader of the Bible will realize that the Scriptures, from Genesis to Revelation, contain extensive historical materials and innumerable allusions to the geographical background of that history. The geographical references range eastward to the Tigris and Euphrates and beyond to Media, Elam, and Parthia – from which came some of those present at Pentecost – and even to India. Including Asia Minor, Egypt, Ethiopia, and Arabia, they reach westward beyond Greece and Rome as far as Spain, which Paul visited or hoped to visit, and where we are probably to find Tarshish, towards which Jonah started his fateful voyage. Between these limits, the Holy Land itself, under its various names – Canaan, the land of Israel, or Palestine – with its immediate neighbors, is at the center of the picture throughout. It is not surprising, therefore, that an Atlas should be of great help to every reader of the Bible and particularly every student; but it must be a historical atlas, not only showing, by maps at the most convenient scales, the physical geography of the area concerned and of particular parts of it, but also, by successive maps of the same area, showing the historical changes which came about through the rise and fall of empires, the changes in geographical names, the appearance of new cities and villages and the disappearance of others, and similar historical developments. Moreover, it cannot be based on the Bible alone, but must make full use of modern archaeological knowledge which both illuminates and supplements the Bible text. Thus, there is mention in the Bible of Ur and Babylon in Mesopotamia, Hazor, Megiddo and Beth-shan in northern Palestine, Lachish, and Debir in Judah, and many other places about which little, perhaps not even their exact locations, would be known were it not for archaeological data. Further, there are places very important historically, which do not happen to be mentioned in the Bible, but which must be shown on the maps of the region and taken into account by the student as part of the total historical and geographical background. Thus, there will be found in this Atlas such places as Mari on the Euphrates, Akhetaton (Tell el-'Amarna) in Egypt, Ugarit in Syria, Hattusa in Asia Minor, Serabit el-Khadim in Sinai, which are unfamiliar to most Bible readers but are nonetheless important. There are, too, names of whole peoples, such as the Hurrians in Mitanni, the Sumerians in the Tigris- Euphrates valley, or the Hittites, with their capital at Hattusa, which can be placed on the map as a result of archaeological evidence. Few and obscure allusions to the Hittites in the Bible would give very little idea of their real importance. Such peoples as the Hittites are on the fringe of the Bible story but in a Bible atlas they must be shown as part of the total background. Nevertheless, in all the maps of this Atlas, the Bible is central, and their purpose is to throw light on it and relate it to its historical and geographical setting. Because in many cases a map alone would not do this for the ordinary reader, it is recommended that the New Oxford Annotated Bible with the Apocrypha: New Revised Standard Version. Ed. Michael D. Coogan. 3rd ed. (New York: Oxford University Press), be used in conjunction with this electronic atlas. The progress of knowledge about the geographical and material background of the Bible – not only the empires, cities, and villages but the daily life and everyday objects of biblical times – has been phenomenal, particularly in this century, and this has been primarily, if not entirely, due to continued archaeological research. The overall plan of the maps is set out in the Table of Contents (bookmarks): if this plan is studied briefly and borne in mind, the use of the maps themselves will be greatly assisted. Zaine Ridling, Ph.D. Access Foundation. ...