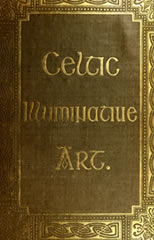 Introduction. Every nation there has been manifested, in varying degrees, a desire for decoration ; and the objects selected for ornamental embellishment, together with the type of decorative design employed, afford an indication of the character and pursuits of a nation no less than of the position it has attained in artistic achievement. The desire that books should be made beautiful is of great antiquity. Evidence of this is to be found amongst the most ancient civilizations : for example, an Egyptian papyrus is preserved in the Louvre at Paris containing a description of funeral rites pictorially adorned in colours, and embellished with gold. The art of the medieval scribe was not wholly confined to writing the text of his work in well-proportioned and legible characters, but also included the graceful drawing in colour of the initials and other capitals. This, though not constituting all included in the term "illumination," yet in a great measure supplied the motif of that art, and in the Celtic schools was an essential contribution towards it. In the twelfth century the word " illuminator " was applied to the artist who decorated the leaves of a manuscript with initial letters and miniatures, not only executed in colours, but wrought with burnished gold; and so illumination, like the sister art of heraldry, employed both colours and metals. ...