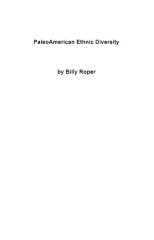 For the nearly five hundred years that some degree of organized historical and anthropological study have been conducted in the Americas, the prevailing majority viewpoint among both scientific experts and the public at large has been that only one racial group was present on the continent during the Paleolithic age. The prevailing paradigm is that Asians not only were here first, but that they had no competitors or company in the Americas. Orthodox legend envisions bands of intrepid Mongoloid hunters crossing Beringia into this empty new continent during the last ice age, forging their way southwards either across the tundra or along the coastlines, living and camping in places which are now offshore. It was believed that they slowly spread south as they were reinforced by successive waves of new Asiatic immigrants who applied population pressure and a native curiosity, we are led to believe, which led the ‘Asiatic Mongoloids’ to reach the tip of South America in what was a relatively very short time span. However, in recent decades several major archaeological finds of human remains from the Paleolithic era have been found on this continent which are forcing many anthropologists to reasses their theories about the original peopling of the Americas. The combined genetic, anthropological, and archaeological evidence surrounding these discoveries has led many of the leading experts in the field to consider whether or not more than one racial or ethnic group may have been present in prehistoric America. Perhaps the most fascinating and certainly the most well-known and publicized of these remains are those of an ancient person commonly referred to as ‘Kennewick Man,’ because the remains were discovered near Kennewick, Washington. Kennewick Man has been radiocarbon dated to 9300 years, and several sets of human remains from a similar age have been discovered and analyzed recently. What was unanticipated is that all of them demonstrate certain physical features which are commonly referred to as Caucasoid, rather than Mongoloid as would have been expected according to the prevailing theory of the peopling of the Americas. In addition, the recent discovery of skeletal remains from Brazil, which date back 15,000 years, also adds weight to the growing mountain of evidence which seems to contraindicate the prevailing paradigm, as they represent a person of markedly African ancestry. Taken together, all indicators seem to point to the likelihoood that more than one distinct racial group was present in the Americas during the early Paleolithic. This assertion, then, will be the focus of my thesis. ...